Nature & Invention: Is there a difference between artificial or naturally carbonated water? Fizz, bubble, effervesce & sparkle: you could consider this a love letter to carbonated water.

It seems like humans have always enjoyed a bit of bubbly. Over the centuries, we’ve indulged in many different beverages naturally carbonated through the fermentation process, including beer, cider, and champagne. Turns out many among us also love our carbonated water: in Germany alone, we drink on average 143.6 liters of bottled mineral water per year – 85% of which is carbonated.

Carbonated water is any water that contains dissolved carbon dioxide gas. Sometimes still water is artificially injected with carbon dioxide to create those pleasant bubbles. But did you know that some mineral water emerges from its source already carbonated?

We map both carbonization processes and investigate the benefits of drinking carbonated water.

How does water get naturally carbonated?

The carbonic acid is also responsible for that refreshingly slightly tart flavor of carbonated water. It also has a preservative effect, protecting water against contamination.

Bottling it all up

In order to ensure a consistent product, some brands that bottle carbonated mineral water actually remove the naturally-occurring carbonic acid from the water prior to the bottling process. Any water impurities are then filtered out before the carbonic acid is re-introduced.

To gain the coveted label of naturally carbonated mineral water, both the water and carbonic acid must be taken from the same geological formation, however, they are often extracted from different depths.

For one, this allows brands to produce different intensities of effervescence––still, lightly sparkling, or sparkling––catering to a range of consumer tastes. This also allows them to guarantee the flavor profile of the water. The purity of CO2 is of great importance in mineral water as even the slightest impurities are noticeable.

Artificially carbonated water was also, in a sense, discovered throughout the course of several experiments.

Water was first aerated with carbon dioxide by William Brownrigg in 1740 using carbon dioxide brought up from mines. His interest in carbonated water was spurred by a visit to a spa resort in Germany where he first tried carbonated mineral waters, a common treatment for digestive ailments.

Subsequent experiments by Frenchman Gabriel François Venel and Irish chemist Dr. Macbride––in 1750 and 1764 respectively––both produced artificially carbonated water using different methods.
Joseph Priestley then infused water with carbon dioxide by suspending a bowl of water above a beer fermentation vat, which naturally produced CO2 while converting sugars into low alcohol, in a Leeds brewery in 1767.
A few years later he published a paper entitled “Impregnating Water with Fixed Air” in which he detailed the means of chemical carbonation by way of dripping sulfuric acid into calcium carbonate in order to produce CO2 gas and agitating the water. His paper was read by Johann Jacob Schweppe from Witzenhausen, who simplified the process and slapped a brand on it: Schweppes, still renowned today for carbonated beverages. Schweppe was the first to receive a patent for the displacement of the water with carbon dioxide in 1783.

Schweppe continued the practice of positioning carbonated water as a digestive relief, albeit without the added nutrition of the minerals present in the carbonated mineral water. He sold his “aerated waters,” as medical remedies, with varying strengths of bubbles: one for the dinner table to relieve digestion pain, one for kidney afflictions, and a stronger one for more distressing bladder and kidney problems.

It’s all about the flavor

Today when artificially, non-mineral carbonated water is made, often minerals, such as potassium and sodium, which occur naturally in mineral waters, are added to the manufactured waters in order to mimic a natural flavor profile. The result is water that tastes slightly tart, mimicking the flavour of naturally carbonated mineral water.

Not all carbonated water offers the same health benefits, particularly if it is not mineralized. However, there is significant evidence that drinking any type of sparkling water improves digestion. This is because the bubbles help to stimulate the secretion and motility of the digestive tract by producing gastric juices.

Sparkling water is also a great tool for weight management: because fizzy water makes you feel fuller, it can help prevent overeating. Plus, it delivers the same delightful sensation as sugary fizzy drinks making it a far healthier option.

Drinking carbonated mineral water is a common treatment for particular ailments in some parts of the world. For example, the highly-carbonated Zuber spring water from the Polish town of Krynica is high in bicarbonate-calcium, sodium bicarbonate-magnesium, and boron, and it is used to treat gastrointestinal disorders and hyperacidity. It’s also bottled and sold around the world.

Unfortunately, the thirst for both natural and manufactured carbonated waters has generated vast amounts of plastic waste. As interest rises in these unique products rise thanks to their myriad of benefits, so too does their carbon footprint.

By Natalia Kvitkova — May 19, 2021
The information contained in this article is provided for educational and informational purposes only, and should not be construed as health or nutritional advice.
facebook twitter linkedin google plus 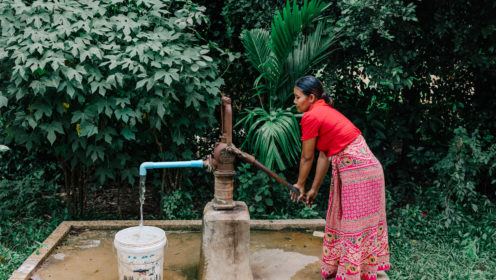